Was going to see my wife but got off flight just before door was closed: Liam Plunkett on dealing with anxiety

England pacer Liam Plunkett has opened up on his fight with anxiety and explained the circumstances he went through during the period. The 35-year-old said it was like “an invisible wall” and everything looked “foggy”. Plunkett added that he felt like he couldn’t get “through that wall”.

However, Liam Plunkett also termed the anxiety attacks as blessing in disguise and opined that without anxiety he wouldn’t have made it to the England’s 2019 World Cup squad. The Yorkshire-born said overcoming anxiety helped him improve as a player and as cricketer.

“If I didn’t get anxiety I probably wouldn’t have played in the World Cup. Many of us define anxiety as a really bad thing and for lots of people it is but when I deal with anxiety it helps me massively in other areas of life.

“I was fortunate my anxiety didn’t happen on the cricket pitch in front of 50,000 people. It was always when I was facing a one-to-one situation. I know it affects different people in different ways but, for me, it really became a gift.

“I learned anxiety is a tool you should use. I feel overcoming the anxiety has improved me 100% as a cricketer and as a person. It’s like practicing in the nets. Why would you not do that for your mind?” Liam Plunkett told ‘The Guardian’.

Liam Plunkett, who hasn’t played for England since winning the 2019 World Cup, recalled his first anxiety attack and said that he had to deboard from a flight just before the doors were closed. Plunkett added that he wanted to see his wife in US but just couldn’t gather the strength to sit in the flight.

“The first one happened when I was on a flight from Newcastle to Heathrow and then on to the US to see my wife. I had to get off the flight just before they closed the door. All of a sudden you’re sat in the plane and sweating. I really wanted to be with my wife but I couldn’t get over this massive hurdle of staying on that flight,” he said.

A similar instance happened when he was on his way to Adelaide to play club cricket. He managed to reach Adelaide somehow but found it difficult to get a taxi from the airport.

“I’d had a few panic attacks but I was in a good place after joining Yorkshire from Durham [in 2013]. I was the fittest I’d ever been. In the winter I got a chance to fly to Adelaide where I’d played 10 years before club cricket at Adelaide University. I took the first flight fine. I landed in Singapore or Hong Kong and had to get a connection. It felt like I couldn’t take a step into the boarding area.

“It’s like an invisible wall. Everything is foggy and I couldn’t get through this wall. It was only that I’d handed my passport in and didn’t have the correct visa which distracted my mind. I managed to get the visa and made the flight. But when I landed at Adelaide I didn’t have the courage to get in a car, or take a taxi to training.

“I wasn’t resting. I would eat at night, and during the day I’d keep myself locked up. It was pretty frightening because I’d not been through that before. I spoke to Tres (Marcus Trescothick the former England batsmen who had spoken bravely about depression) and he put me in contact with the PCA [Professional Cricketers’ Association.

Liam Plunkett also credited support from his mother to overcome these anxiety attacks. Plunkett’s mother has had cancer three times and his father had both a kidney and a liver transplant.

“They’re good and I get my grit from my mum. She goes out for a 14-mile walk and so she’s the fittest she’s been in a long time. Recently I’ve been able to see my mum at a distance and I’m now doing personal training with her. It gives me practice [as a personal trainer].

“I was playing in the World Cup in the Caribbean and I offered it because he was struggling. But he’s in a decent place now,” Liam Plunkett revealed. 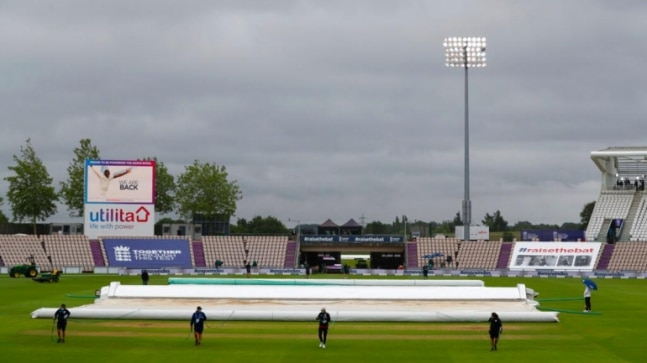 The much-anticipated return of international cricket after almost four months was, almost predictably, delayed by rain on Wednesday as the start of England’s first Test against the West Indies in Southampton was pushed back. The Read more… Virat Kohli, Mohammed Shami among 5 Indian players Sourav Ganguly would have loved to have in his Test team

Mayank Agarwal asked Sourav Ganguly to select 5 players from the current Indian Test team that he would have loved to have in his side. Reuters Photo HIGHLIGHTS Kohli, Rohit, Shami, Bumrah and Ashwin made Read more… Sourav Ganguly on MS Dhoni handing him captaincy in his farewell Test: That was a surprise

Birthday boy and Board of Control for Cricket in India (BCCI) president Sourav Ganguly recalled memories from his final Test in 2008, shedding light on a wonderful gesture from the then India captain MS Dhoni. Read more…