The city will get a new Mayor tomorrow. The Municipal Corporation (MC) House will witness a direct contest between the Bharatiya Janata Party (BJP) and Aam Aadmi Party (AAP) for the post of Mayor, Senior Deputy Mayor and Deputy Mayor. The poll will be held tomorrow at 11 am. 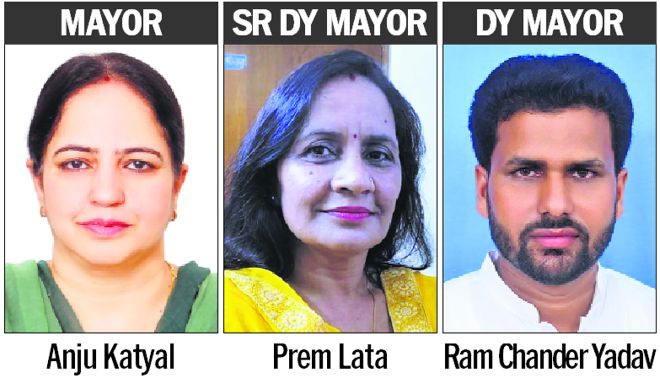 In the 35-member House, AAP has 14 members, the Congress seven and the BJP 13, including Harpreet Kaur Babla, wife of former Congress leader Devinder Singh Babla who switched over to the saffron party, besides one

As the Congress has already declared to abstain from voting, the vote of the lone SAD councillor will play a crucial role in deciding the fate of the candidates in the fray for the three posts. Hardeep Singh, city SAD president and councillor, however, has not revealed whether he will vote or not?

Fearing poaching by rivals, all three parties had moved their councillors out of Chandigarh and they were kept under close vigil.

AAP first shifted its councillors to Delhi and then to Barog in Himachal Pradesh.

Sources said AAP councillors, who were putting up at Hotel Barog Heights in Solan district, returned to the city in the evening.

The sources said all AAP councillors were huddled up in a hotel in the Industrial Area in the city and would proceed to the MC office directly from the hotel.

Meanwhile, the BJP shifted its councillors to Shimla and today they returned to the city to cast vote in the elections.

However, the Congress, which took its councillors to Jaipur, is not expected to even attend the House meeting. Till the filing of the report, they had not left from Jaipur.

They are expected to reach the city after the poll is over.

Both Anju and Sarabjit are first-timers. The post of Mayor is reserved for a woman councillor in the first year of the new MC House.

In its debut MC elections in Chandigarh, AAP won 14 seats and the BJP strength was reduced to 12 seats from the 20 it had won in 2016.

In the MC elections held on December 24, the Congress tally had gone up to eight from four in 2016. However, it lost its ward 10 councillor Harpreet to the BJP after she and her husband, Devinder Singh Babla, joined the BJP.

Now, in the full House of 36, comprising one vote of the Chandigarh MP and 35 councillors, the BJP and the AAP have 14 votes each, the Congress is left with seven votes and the Shiromani Akali Dal (SAD) has one vote.

Cong councillors may not attend meeting

The Congress, which took its councillors to Jaipur, is not expected to even attend the House meeting. Till the filing of the report, they had not left from Jaipur. They are expected to reach the city after the poll is over.

Covid curbs: Last order for food in Chandigarh to be accepted till 9 pm

In the wake of a surge in fresh cases of Covid-19, the UT Administration has imposed certain restrictions to contain the spread of the virus.

On night curfew from 10 pm to 5 am, District Magistrate Vinay Pratap Singh has issued a detailed order. According to the order, there will be prohibition on the movement of individuals for all non-essential activities between 10 pm and 5 am in Chandigarh. No person will leave his home or move on foot or by vehicle or travel or stand or roam around on any road or public places during these hours.

However, the authorities have exempted essential activities, including operation of multiple shifts in industries and offices, movement of persons and goods on highways, unloading of cargo, travel of persons to their destinations after disembarking from buses, trains and airplanes. Passengers going to or returning from the airport or railway station or the ISBT shall be exempted.

There will be no curbs on inter-state and intra-state movement of essential and non-essential goods and all vehicles/persons in bona fide transit shall be allowed to pass.

Also, hospitals, chemist shops and ATMs will be allowed to remain open 24X7.

However, kitchens of restaurants/eating places, hotels, including food joints/courts, in various malls shall run only at 50 per cent of their capacity and close by 10 pm. The last order for food can be accepted till 9 pm. The restaurant and home delivery staff shall be allowed to move on production of a valid ID card issued by their respective establishments.

view all posts by Razak.NewsRL